DTS 4020.timebridge is now available!
Back to News 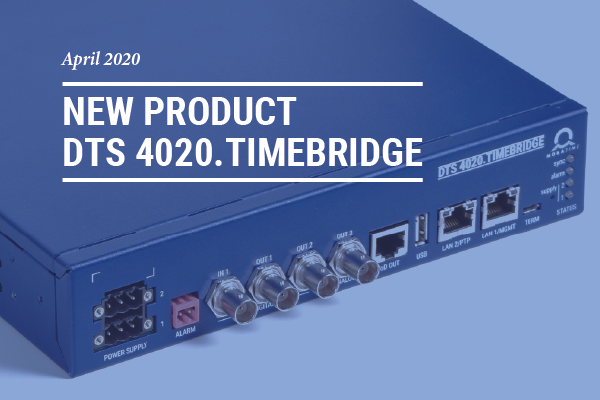 As the name describes, DTS 4020 acts as a timebridge between IEEE1588 protocol supplied across a packet network to traditional serial Time-of-Day (ToD), 1PPS, 10MHz and IRIG B signals and NTP/SNTP while synchronizing from reference signal inputs such as PTP Slave, SyncE, Frequency/PPS and NTP (future prospect).

The high performance DTS 4020.timebridge is featured to synchronize several thousands of NTP and SNTP clients every second in a mid or large infrastructure network. In addition to this, DTS 4020 is equipped with the following time code and frequency outputs:
– 1x Time of Day
– 2x pulse/frequency/IRIG output
– 1x IRIG-B/10MHz sinus

DTS 4020.timebridge with the above feature may be helpful in the applications such as
• Telecom services
• Power utility
• Applications requiring Precise Timing delivered over a Packet Network